Most beautiful club on the island? Quite possibly, and it certainly has a paradise feel to it as the name suggests. A labyrinth secret garden that oozes glam, Es Paradis has been around since the mid 70s and is one of the original charms of Ibiza's nightlife.

A rite of passage for most people who visit the island, Es Paradis excels in dazzling Ibiza Virgins and their infamous water party (Fiesta Del Agua) is the ultimate holiday clubbing experience.

Regularly commented on as the most beautiful of all Ibiza's clubs (no mean feat!), Es Paradis Terrenal - to use its full name - really is like Heaven on Earth, as the translation suggests.

Quite unique in Ibiza, the decor is largely white and ornate. Think Roman columns and marble surfaces. The greenery is well-maintained and extensive. The main dance floor is circular and tiered like an ampthitheatre, and overlooked by the DJ booth. Above the dance floor is podium populated by professional exhibitionists.

This central dancefloor allows water to gather like a swimming pool when it is sprayed into the club during the legendary Fiesta Del Agua.

Elsewhere, there is a maze of stairs and corners and levels and walkways, meandering around the club and giving access to different VIP areas. The second room, here is also the Smoking Area, runs alongside the front face of the club upstairs.

Second only in longevity to Pacha, Es Paradis opened in 1975. The spectacular creation of Pepe Aguirre drew people to the then sleepy fishing village of San Antonio, in no small part thanks to the work of designer Lluis Güell, the man also responsible for the design of Cafe Del Mar.

The stunning decor was typical of the glory days of old Ibiza and the early days of the electronic music invasion in the late 80s and early 90s. By the mid-90s, Es Paradis was one of the main attractions for people coming to Ibiza for music and partying. British promoters like Clockwork Orange, The Gallery and Up Yer Ronson brought the best DJ talent around and the late 90s success of the club coincided with the boom years around the millenium for Ibiza. DJs like Sasha, Danny Rampling and David Morales represented the best of those who played the club during the 90s.

Es Paradis' Water Party is one of the most iconic in Ibiza and has to witnessed to be believed. It is a ritual amongst young clubbers to the island, a true baptism!

How to get there: Located in the centre of San Antonio, it is easy reachable by any bus that goes to San An. Taxis cost about 20-25€ from Ibiza or Playa D'en Bossa and about 10€ from further parts of San Antonio Bay. 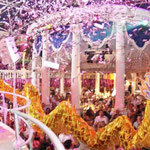 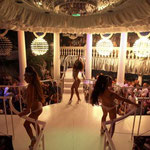 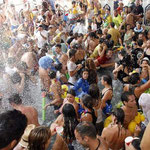 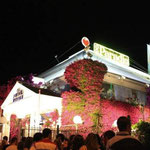